One of the best parts about being a presenter on a community Radio station is that I am able to learn about, interact and discover local people, projects and events. One of my latest discoveries is St Michael’s Players, a theatre group based in Chiswick, West London.

Living in Chiswick myself I had seen the posters for their summer musical, ‘Salad Days’, in fact this was their first musical which celebrated their 70th year! It was being shown just down the road from me at St Pauls Church, so I took my boyfriend along to the show which was held in the gardens in what was luckily the sunniest part of the summer so far! A bbq and bar topped off the lovely scene and we ate our burger and drank our wine as we enjoyed the performance. Although my boyfriend is not a fan of musicals (I had to lie to him about Les Mis when we went to see it at the cinema, describing it as an action adventure!!) he, like the rest of the audience, thoroughly enjoyed ‘Salad Days’. The production was so professional for a local theatre club as the cast had head mics and a full stage set up with the audience sat in theatre styled raised seating. I was very impressed with the whole production, especially the talented cast, particularly the lead characters and their voices which hit every note without fault! 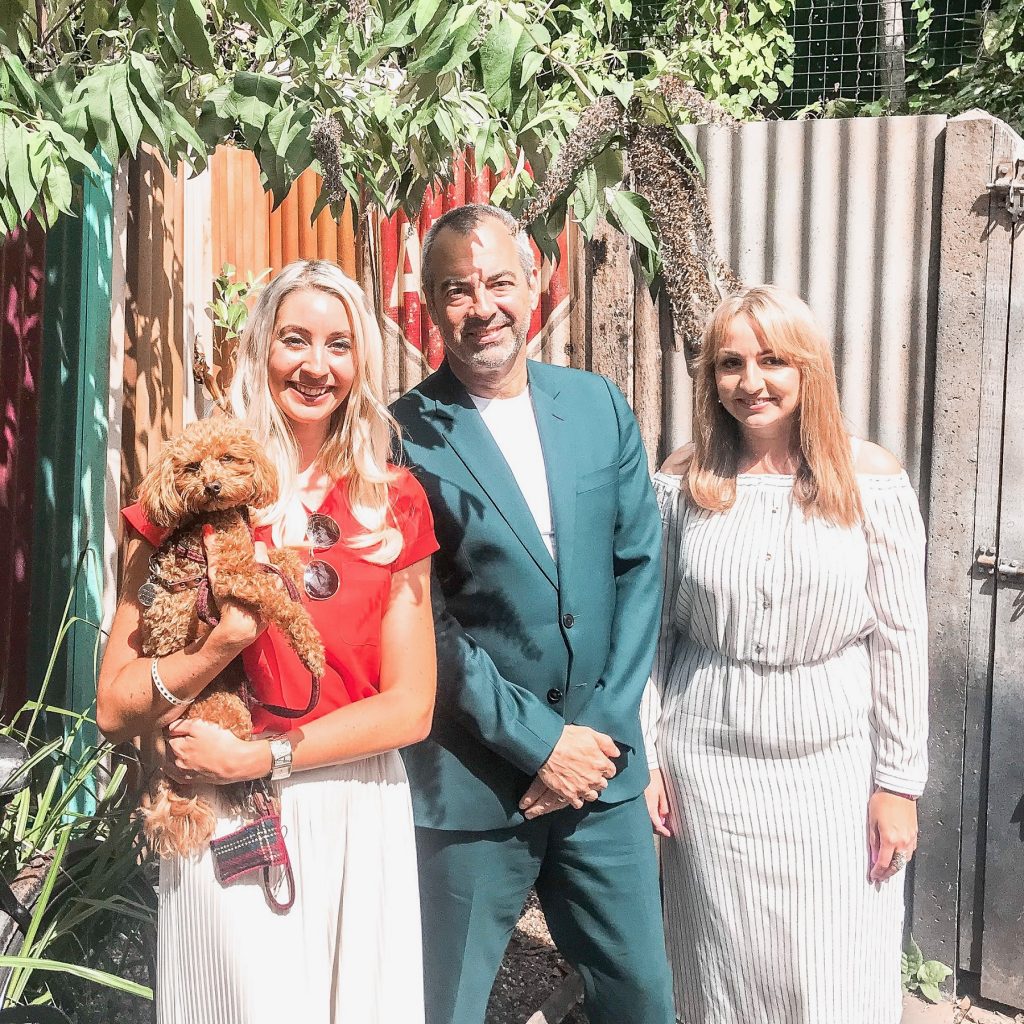 This lead to myself and Fleur de Henrie Pearce and Director Paul Smith from St Michael’s Players getting in touch with a view to promote future productions. Fleur was the producer of ‘Salad Days’ as well as being the producer for their next production ‘The Long Road’. The latter being a far more serious play that St Michael’s had already put on in 2018 to a fantastic reception and even won an award for ‘Best Restorative Justice Play’. With the success of the play last year and to celebrate the company’s 70th anniversary the Players decided to take it on tour all the way to The Edinburgh Fringe Festival. 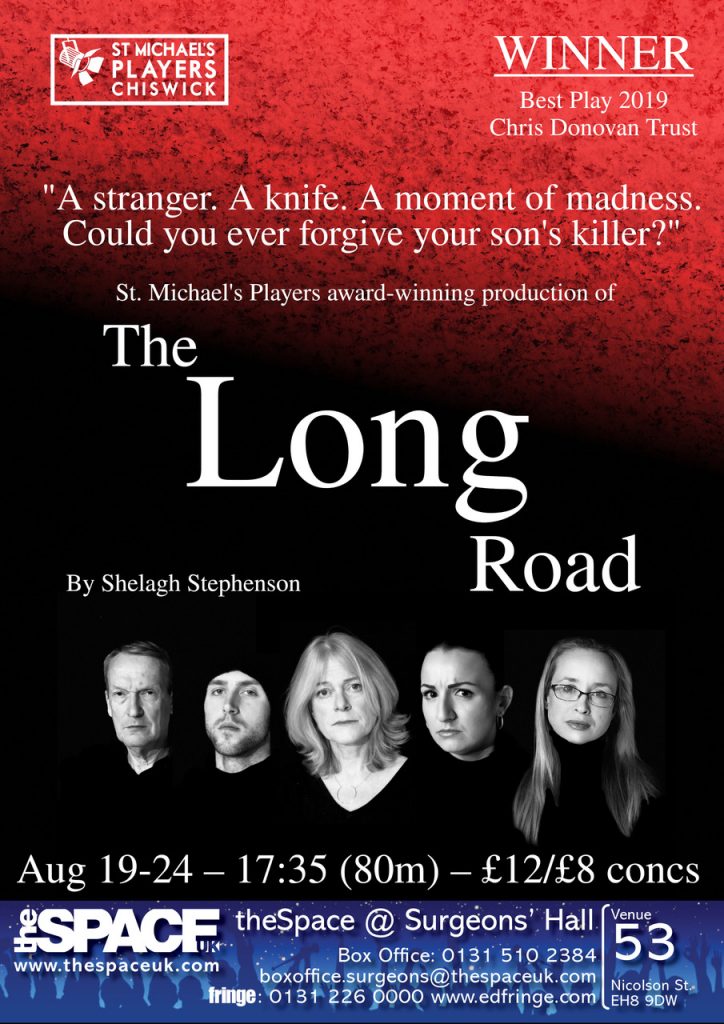 There were 2 preview shows of ‘The Long Road’ in London last week and I was lucky enough to attend one of them and wow I can see why it was so well received and will be a hit at The Fringe. Let’s start with the subject of the play – it focuses on knife crime which is unfortunately highly prevalent not only in London but worldwide and so a worthy subject for an audience by raising awareness of the devastation it can cause for all involved. The decision of the family of the victim, Danny, to reach out to the perpetrator, Emma, explores how Restorative Justice can help with rehabilitation, forgiveness and enables people to move forward. 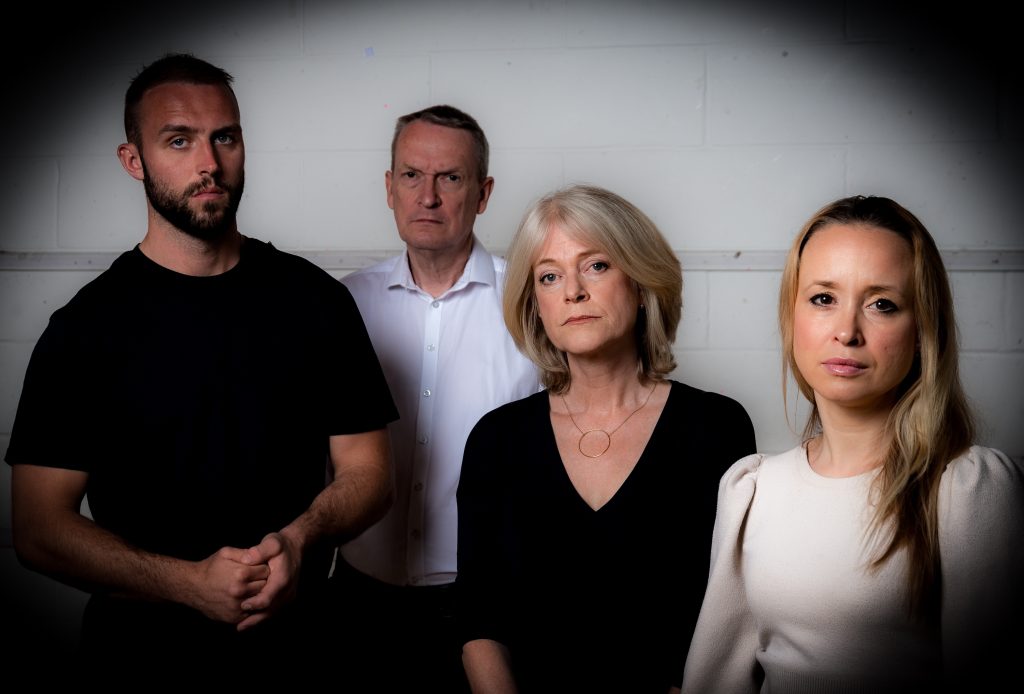 Through the family of Danny, his Mother, Father and brother, the audience is taken on each of their journeys on their own long road to healing, (The Long Road is described by the counsellor in the play Elizabeth, played by Leonia Chesterfield). As I watched the play I found I was changing my own outlook as when I had read the synopsis and knew that Emma had committed a horrendous crime I thought ‘how could anyone possibly feel sorry for someone like that?’ and ‘why on earth would anyone want to come face to face with someone who had killed a love one’. Seeing the desperation of Danny’s Mum Mary (played by Elizabeth Ollier) trying to make sense of the murder and to gain an understanding and to seek a way forward I sympathised with her need to meet the perpetrator. In contrast Danny’s Dad John (played by Alastair Dewar) did not want to meet Emma, highlighting the opposite view. His complete inability to deal with the situation, to me generated most sympathy as his emotions changed from moments of madness contrasted with lighthearted humour as he struggled with his emotions.  Danny’s brother Joe (played by Louis Bricusse) almost became the mediator between his parents. Whilst he could originally empathise with them both, his emotions during the play turned from anger (his Father) to hopefulness (his Mother). 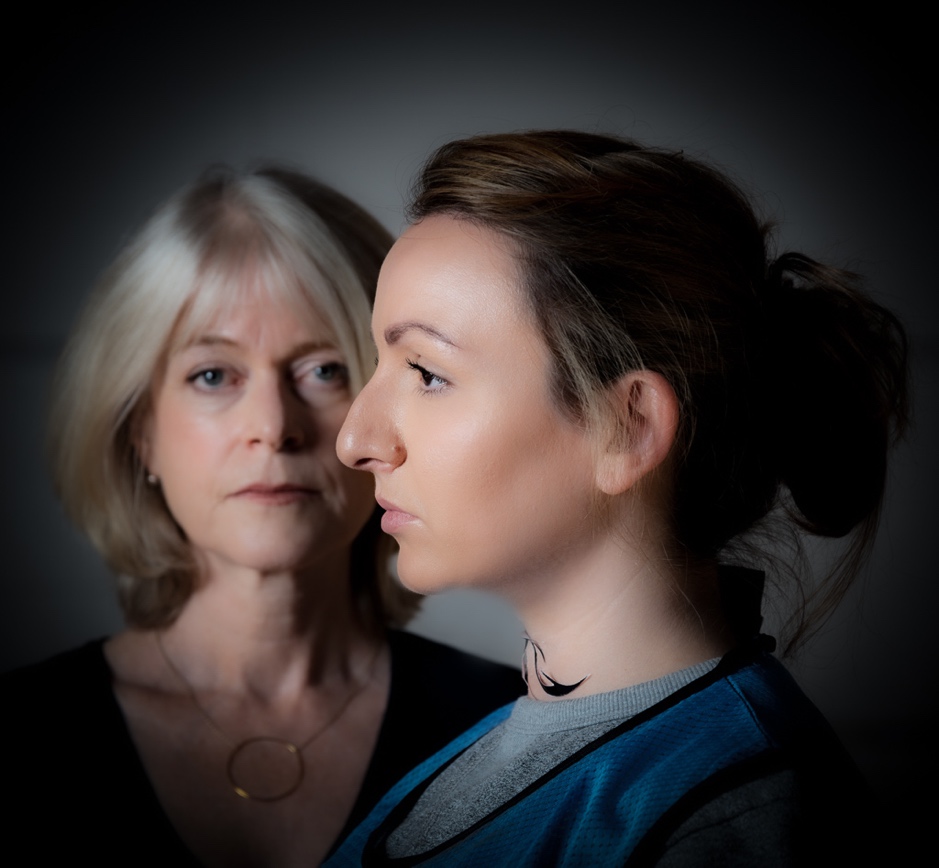 The character of Emma, the murderer, is played by Fleur herself and is fascinating to watch. Playing the part of Emma, who is obviously someone who is hated so strongly, she manages to enable you to feel a pang of sympathy for her.

A very topical play on a very emotive subject that will have even the hardest ice queens like myself, appreciating the many feelings and emotions it portrays.

‘The Long Road’ will be at The Edinburgh Fringe this week August 20th – 24th at 5.30pm at venue 53, The Space at Surgeons Hall and tickets can be purchased for £12 (£8 concessions) here https://tickets.edfringe.com/whats-on/long-road

I interviewed Fleur and Paul on Riverside Radio recently and you can listen back here: https://www.mixcloud.com/riversideradio/lexie-carducci-riverside-today-8th-august-featuring-st-michaels-players/

Have a sneak peek at the preview video too! https://www.youtube.com/watch?v=BHkfQ4G0mg4

St Michael’s Players are always on the look out for people to join them! Their renowned pantomime is auditioning soon and if you would like to be involved or want any further info head over to https://stmichaelsplayers.weebly.com/